‘Bailin’ Biden’: Former Frontrunner’s Early N.H. Departure Will Hurt Him Down the Stretch

When his supporters gathered to watch the returns come in on Primary night in Manchester, N.H., Joe Biden was nowhere to be found.  His airplane had landed in South Carolina hours earlier, as Biden fled his coming Granite State defeat while ballots were still being cast.

Volunteers for the one-time frontrunner — who led in New Hampshire polls as recently as a month ago — received an email from their candidate, literally as they waved signs at polling places and made “get out the vote” phone calls:

“Join us tonight to celebrate with other members of Team Joe at our primary night event with special guest Valerie Biden Owens! Jill and Joe Biden will address their New Hampshire supporters via livestream — you don’t want to miss this.” 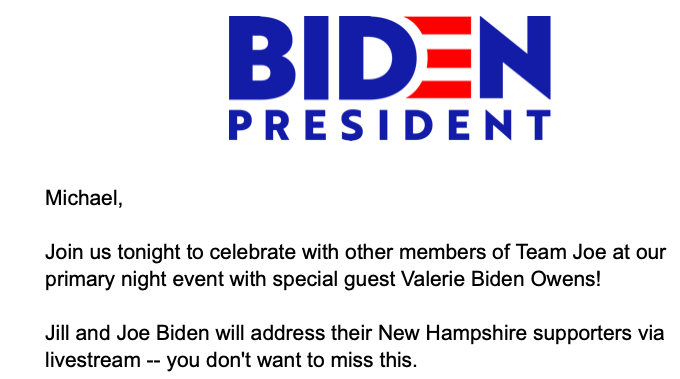 Ironically, Biden “missed this” event himself. Instead, he spoke to a clearly deflated crowd of supporters from Columbia, S.C. — a state his stumbling campaign considers its firewall. However, even in the Palmetto State, Biden’s support has slipped from the high 40s to a new RealClearPolitics average of 31 percent.

At the campaign watch party in Nashua, crowd-greeting duties fell to Biden’s sister. “I can sense him in the air,” Valerie Biden Owens told the half-filled room just before Biden appeared on the big screen via videolink. “I know my big brother’s around here some place.”

Campaign professionals couldn’t recall a top-tier candidate ever treating their volunteers this way. New Hampshire-based strategist Michael Dennehy said, “In my 30 years of doing this, I can’t recall ever seeing a candidate leave while votes were coming in. Never.”

When Barack Obama was defeated by Hillary Clinton in 2008, for example, he stayed in New Hampshire and told a crowd of supporters in Nashua he was “still fired up and ready to go.”

George W. Bush, who lost to Sen. John McCain by 18 points in the 2000 GOP primary, stuck with his supporters at St. Anselm College until the bad news came in. “We fought the good fight, and I am proud of my supporters, and I am proud of the kind of campaign we conducted here in New Hampshire,” Bush said.

Tom Rath, a GOP strategist and veteran of many #FITN campaigns, told NHJournal: “Bush, who knew he was going to lose that night, refused to leave until results were in — even though senior staff wanted to go and had the plane ready. He insisted on going through the tough news with his New Hampshire team.”

Even Sen. Ted Cruz, who won the Iowa Caucus but lost to Donald Trump in the Granite State by 25 points four years ago, stayed in Manchester to say thanks.

The result is that Biden’s campaign performance has done damage to more than his political fortunes down south. Biden has hurt his reputation. Why would a fence-sitting Democratic politician in Nevada or South Carolina risk his political capital on a candidate who could bail on you before the end?

“Joe Biden has never had the mental discipline to be an effective presidential candidate,” says Michael Barone, co-creator of the Almanac of American Politics.

Still, some political pros argue, it’s too early to completely write of Biden’s chances despite a single-digits, fifth-place performance — and abandoning his Granite State troops.

“There’s going to be an effort now to calm everyone down and remind them that we haven’t heard from a significant number of African American or Latino voters,” says Joel Payne, a Democratic strategist who worked on Hillary Clinton’s 2016 campaign. “Until their voices have been heard, it’s too early to write of Joe Biden.”

At the same time, Payne — who is African American — warns Biden against assuming that black voters will put personal affection over electability. “African-American voters are pragmatic, and at some point you have to win to demonstrate you are viable against Trump.

“After an underwhelming start, Biden is facing a crisis of confidence from black voters,” Payne said.

Meanwhile, New Hampshire Democrats remain disappointed by Biden’s election day disappearing act. “What a baby,” Judy Dickson of Manchester told the Boston Herald. “I just think he’s lost it. I don’t think his advisers are any good. Whoever told him to leave is stupid.”

Jim Merrill, who worked on both McCain campaigns for president in New Hampshire, agrees.

“Leaving like this just says to the world ‘My campaign is toast.’”