A new Change Research THE 603 New Hampshire Poll puts Sen. Elizabeth Warren at the top of the charts, while Sen. Joe Biden drops to a disappointing 3rd place:

So what’s happening with Biden in New Hampshire? Check out his trend in the RealClearPolitics poll average since May 10th: 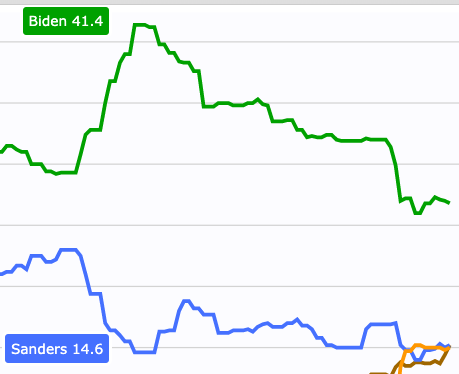 You can argue that the Change poll sample for New Hampshire was too small, but you can’t argue about the overall national trend of the Joe Biden campaign. Something is happening, and it’s not good for the former VP.

When a prominent progressive like Rep. Alexandria Ocasio-Cortez is suggesting that Biden may have exceeded his “sell by” date, that’s a sign that Democrats are having real doubts about his staying power.

“I think there are some folks that are of a certain age where you can kind of question their capacity,” Ocasio-Cortez said of Joe Biden in a New Yorker interview. “But I don’t want to say, just because someone is 79, they can’t or shouldn’t run for president.”

There isn’t a recent poll on the subject of Biden’s age in New Hampshire, but nearly forty percent of Iowa caucusgoers who’ve decided against Biden told Suffolk University pollsters that his age and/or the many decades he’s spent in Washington are reasons to reject his candidacy.

Speaking at a beer and barbecue event in Portsmouth targeting young Granite State voters Friday, the president of the NH Young Democrats Lucas Meyer said that young leaders are needed “to make sure there’s a sense of urgency” on global warming and student debt. “Young people in office will lead on those issues,” Meyer said. “That’s why we elect young people.”

He then proceeded to introduce the event’s keynote speaker: 76-year-old Joe Biden.