Guess Which 2020 Democrat Is Outperforming in New Hampshire?

With the New Hampshire Democratic Party’s state convention and 2020 candidate cattle call on Saturday, it’s the perfect time to look at how the presidential hopefuls are doing in the Granite State vs. their numbers nationally. 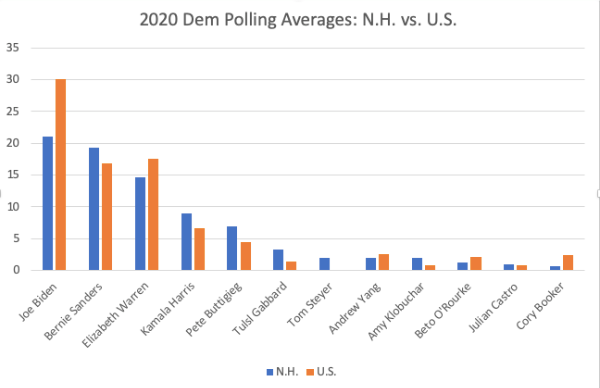 Notice who is outperforming in New Hampshire vs. the US as a whole: Bernie Sanders (not a surprise), Kamala Harris (big surprise!), Pete Buttigieg (yawn–college-educated white people love him) and — percentage-wise by a huge margin — Tom Steyer. Questions abound, starting with ‘Hey Senator Harris, why won’t you come to New Hampshire?”

Now note who is under-performing in New Hampshire: Joe Biden, Elizabeth Warren, and — also a surprise — Sen. Cory Booker. Biden and Warren’s apparent gap is likely related to them over-performing nationally due to name ID–though it is interesting that Warren’s not doing better in her own back yard.

The real puzzler is Senator Booker. He’s got one of the state’s smartest Dems on his team (Jim Demers) and plenty of organization, too. He’s campaigned here, he’s gotten endorsements….but no buzz.

UNH’s Dante Scala is right: “The amount of time Booker’s spent here, the endorsements he has already, there seems like a real disparity between the resources he’s putting in and his poll numbers.

And New Hampshire Journal has consistently reported on Steyer’s potential for success. Having 200% more support in New Hampshire–and according to Morning Consult, a similar surge in other early states–is a reminder of the Consultant’s Equation: