This week a group of prominent anti-Trump Republicans announced the formation of a new super PAC, the Lincoln Project, with the explicit goal of defeating President Trump in 2020 and congressional Republicans who support him. And, they add, they are prepared to work with Democrats to do it.

“Over these next 11 months, our efforts will be dedicated to defeating President Trump and Trumpism at the ballot box and to elect those patriots who will hold the line We do not undertake this task lightly, nor from ideological preference. We have been, and remain, broadly conservative (or classically liberal) in our politics and outlooks. Our many policy differences with national Democrats remain, but our shared fidelity to the Constitution dictates a common effort.”

Daily activities of the new super PAC will be overseen by veteran GOP strategist Reed Galen and longtime New Hampshire GOP activist Jennifer Horn. A former two-term chairman of the NHGOP and a Republican candidate for Congress, Horn has been an outspoken opponent of President Trump since the 2016 campaign. InsideSources caught up with her and asked her about the new project.

IS: So why did you join the Lincoln Project?

HORN: There are multiple reasons. Of course, I believe very strongly it’s the right thing to do. I’m doing this for the same reason I ran for Congress and served as the chairman of the New Hampshire Party. I’ve spent years as a spokesperson for Republican values, like small government and defending the Constitution.  And Donald Trump doesn’t have a clue about what Republican values are.

I believe that what we’re doing here is being a voice for Lincoln, for Reagan, for all of those sound, conservative Republicans who’ve come before us.

And I firmly believe that Donald Trump is an existential threat to our Republic. I believe that Mitch McConnell is leading the Senate Republicans into a constitutional crisis when he says that he’s going to manage the impeachment trial in complete coordination with the White House. They are supposed to be a separate and equal branch of government, and instead they are completely under Trump’s thumb.

IS: What would you say to the pro-Trump Republican who say “Look, we didn’t like the Bushes, we didn’t like Romney and we really didn’t like McCain, but we stuck with the party because Establishment Republicans like you said sometimes you have to back a candidate who’s not your first choice. But now that we’ve got a nominee who represents us, you Establishment types don’t like him and won’t accept him.” What’s your answer?

HORN: What I would say is that I was working for the Republican Party and Republican principles when Donald Trump was still donating to Hillary Clinton and John Kerry. So I reject outright any comparison between Donald Trump and Republicans like George Bush or John McCain or Mitt Romney. I would say to those Republicans that our party has always said that in addition to our political principles and policies, we are the party that defends the Constitution and believes that character matters, that we must have integrity in our leaders. 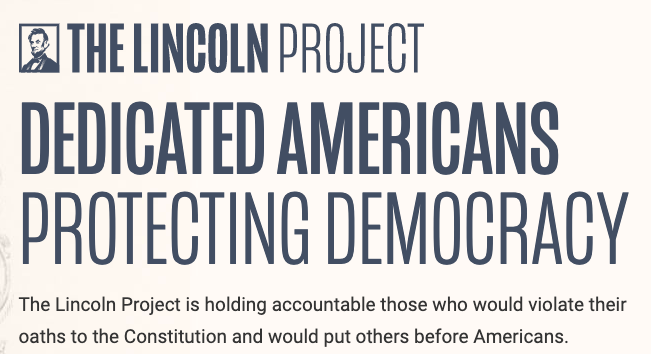 IS: So what, specifically, is the Lincoln Project trying to accomplish? According to reports, you’re targeting Trump supporters in Congress, is that right?

HORN: That’s correct. Our goal is to both educate voters and hold Trump-supporting Republicans accountable. They have abandoned their oath of office. Our priority geographically is Ohio, Michigan, Pennsylvania, Maine, Colorado and Arizona. New Hampshire is a swing state, our four electoral college votes are very important, so we may play there as well.

IS: So when you say Maine, you mean Sen. Susan Collins. There’s one Republican left in all of New England who’s still in the federal legislature, and you’re targeting her?

HORN: Collins has a reputation for being an independent voice, for standing firm and standing up for what’s right. And we are very much hoping she will do their thing. She is one of the senators who has refused to take a public position on impeachment, distancing herself from McConnell’s debacle of a statement the other day. And so we are hopeful that she will stand for the Constitution and do the right thing.

IS: And the right thing is voting the president out of office?

IS: And if she votes against removing President Trump from office, or casts a vote to end the impeachment process…

HORN: She will be a target, yes.

IS: And what do you, Jennifer Horn, hope to accomplish with the Lincoln Project?

HORN: I know this sounds corny, but it is absolutely true:  I believe that history will remember where Republicans stood in this moment. I believe President Trump is an existential threat to the Republic and I believe that history will not look kindly on those who were silent in the face of a weak and cowardly president. I haven’t moved from my conservative principles. I’m still pro-life, pro-second-amendment, pro-small government, and Trump isn’t really any of those things.

And so I will not be bullied out of the Republican Party because I continue to stand on Republican values when so many in our party refuse to.

You cannot be for the Constitution, for our Republican principles, and for Donald Trump. It is simply not possible.