Is Feltes vs. Volinsky the Democratic Throwdown We’ve Been Waiting For?

Posted to Politics October 23, 2019 by Michael Graham
For months, political junkies and campaign pros watching the 2020 Democratic presidential race have been asking the same underlying question in different ways: What’s up with New Hampshire Democrats?

Are they the center-left party that wants steady leadership and is open to bipartisan cooperation, ala Sen. Jeanne Shaheen and Rep. Chris Pappas?

Or are they the party of “big structural changes” and “a political revolution,” ala Sen. Elizabeth Warren (who’s the prohibitive favorite to win NH) and Bernie Sanders (who won it in 2016)?

The data is all over the place.

It’s true that Warren and Sanders are doing well in New Hampshire—better than any other early state – and it’s true that a New Hampshire Journal poll earlier this year found that 60 percent of the state’s Democrats say they support America becoming a more socialist country.

“But look who wins our elections,” says Kathy Sullivan, former chair of the state Democratic Party and the state’s Democratic National Committeewoman. “It’s almost never the candidate on the extreme.” 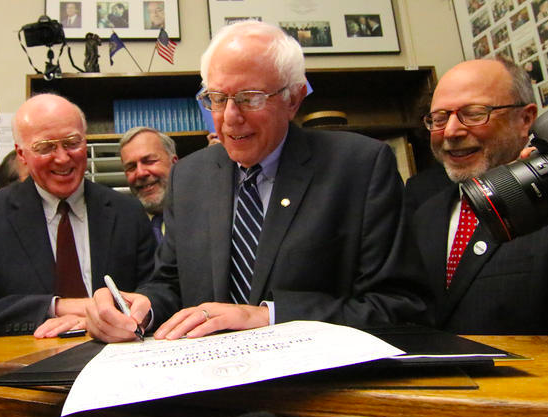 Andru Volinsky is on hand as Sen. Bernie Sanders files for FITN primary in 2016.

Nobody’s going to mistake Senate Majority Leader Dan Feltes for a moderate, but he’s not aggressively progressive like Executive Councilor Andru Volinsky.  Much has been made of the fact that Feltes has pledged to oppose a state sales or income tax (the NHGOP would argue he’s already broken that pledge), while Volinsky is open to the idea and wants to have a conversation about it.

Which translates from political speak into plain English as: “I want my income tax NOW!”

But the divide between the two is bigger and in many ways parallels the apparent divide in the NH Democratic Party.  Volinsky wasn’t just a Sanders supporter, he was a Sanders delegate to the DNC and Sanders’ counsel who argued that the Vermont Socialist shouldn’t be kept off the 2016 primary ballot merely for not being a Democrat. 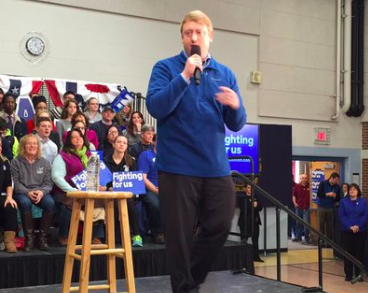 Dan Feltes was an active supporter of Hillary Clinton who, of course, got crushed by Sanders in the primary. But it could be argued that Sanders’ win was the singular victory for the progressive Left in New Hampshire. After that, Molly Kelly defeated Steve Marchand, Chris Pappas beat a field that included several Sanders’ progressives –including Sanders’ son Levi — and there are no serious primary challenges from the AOC/Sanders/Green Left for major Democratic incumbents on the horizon.

Is that because Granite State Democrats are more centrist? Or is it because the strongest candidates thus far have been from the not-quite-as-far-Left segment of the party?  This could be the test that the Molly Kelly/Steve Marchand race would have been if they both hadn’t been such mediocre candidates.

For all the obvious reasons, the 2020 Democratic presidential race is going to get all the headlines. But for the future of the NH Democratic Party, this governor’s race could be the contest that makes all the news.